The message of the north was strong and deep like a pebble being dropped into a pond. The ripples resonating to the far reaches of the land and beyond. August 4 , I woke to find the prayer flags in the East had been released! The prayers had been heard. They included Amber and Chris, myself ,Laurie, Loretta and Faye. This was right around the Fire gateway of Leo (15 degrees). It certainly was unexpected and a transformative time.The eagle and condor had big winds of change coming through as letting go and new beginnings were on the horizon. 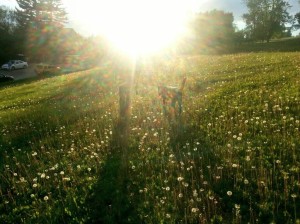 Amber and Chris had sold their house and had taken a trip to Germany and were ready to move into their new house when Benny Bear (their dear dog who was Ginger’s pup) attacked another dog and it was not the first time. Chris and Amber had to make a major decision and decided Benny would have to be “put down”. They called me and it was very sad, but we had to believe there was a higher purpose. We did a ceremony the night before and Benny confirmed to us that there was a reason this was happening.
I pause here to explain the larger picture about Benny Bear. I rescued Ginger (my dog) and Benny Bear off the Stoney Reserve three years earlier. I was spreading some of the ashes of Bentley ( my 105 pound german shepherd who died 6 months earlier of old age ) on Stoney Indian Park. It was our favourite place to be . There was a mother (Ginger) and pup (Benny Bear) running wild. The pup was skin and bones and full of worms. I hesitated , but after 3 encounters with them I let them in the car and everything changed. It was wild beginnings and I was fostering them as they needed a lot of vet care. Amber and Chris found Benny Bear and I realized about the same time that Bentley had reincarnated through Benny Bear. This is how we became friends.
So back to September 1 , 2014 . Amber asked if I would lead a ceremony with them on Stoney Indian Park to spread some of Benny Bear’s ashes back to the place where it all began. There is a medicine wheel on this land that I was a part of the creation of along with other medicine people including Grandmother Berniece Falling Leaves back in 1988 . I asked Amber where she would like to do the ceremony and the medicine wheel and the river were the spots. Ginger came with us and as we approached the wheel Ginger picked up on a full eagle wing. I was surprised as I had just done medicine with an eagle wing that I had , making Paho’s (prayer feather’s)with eagle , raven and owl . Ginger had resonated with the eagle and here she was finding one on the land. Then we approached the wheel respectfully and there in the centre was a eagle skull ,and an eagle staff and all kinds of medicine pieces and feathers. It was profound. At first I thought it was my medicine pieces that had been stolen last year. I lifted up the eagle skull (how often does one see an eagle skull?)because mine was taken but it was not mine. But this felt so mysterious. We did our prayers and offerings on the sacred wheel and left some of Benny Bear’s ashes there with this beautiful medicine.Benny gave us three small feathers and then we continued the journey for him down by the river and after he gave Amber a beautiful Heart Rock. WE were all very moved and Ginger too.
I returned home and was in my shed looking for something and found my Grandmother’s wicker sewing basket. Benny Bear was giving me a gift. I looked inside and to my surprise found four small photo albums .The first had photos of Bentley. I begin to weep. There were photos that I thought I would never see again because they too had been taken. They were photos of me holding him when he was ill and also photos when he was young. Then there was and album on Tiger and the same thing .Photos that I thought were gone. Then of Abby, Raven and Malibu…..all the photos were there. I was realizing that my medicine had returned . The objects on the medicine wheel , the photos, I had seen different pieces of jewelry in the last month that were like mine but I didn’t need to purchase them or replace them. I had detached from all of these things. My medicine was within me. Within a few days I created a new eagle smudge fan and a Raven/Benny Bear staff /walking stick.
Benny Bear is bringing through his medicine in special ways for Amber and Chris . Ginger feels it ,too. Miracles do happen and the power of Love and the Divine Grace of this journey in the last year with all of your incredible support is living proof.
Amber with some help from Chris has put my website together susanoshea.wordpress.com. so that Lisa and I can market our Hawaii Retreat from March 15- 22, 2015. It has been wonderful to be writing my stories .Spending time with Grandmother Berniece Falling Leaves in Tacoma ,Wa. was so special .Michael and I had 9 days in magical Sedona Arizona ,nurturing our relationship with one another and the land. I spent two days in Edmonton with my Kundalini teacher receiving approval for Instructing her Beyond Addiction course. Very rich experiences of which I am so grateful.
And so to complete the turn on the spiral I would like to invite you all to return to Hilltop on the Full Moon Dec 6, 2014. More details to come .

So Much Love
Susan